“We need help up here now!” On May 27th Dr. Edward Skip Walton and his daughter Meredith were at the LPGA Volvik Championship golf tournament in Ann Arbor, Michigan, volunteering at the North Star Reach exhibit booth, when they heard a call for help. They performed emergency CPR to David Beeler III, a 26-year-old man in full cardiac arrest. Fortunately, with the two very caring, capable doctors nearby, David was in good hands.

"Dr. Skip" is the medical director at North Star Reach, one of 30 SeriousFun camps and programs that serve children living with serious illnesses and their families. His daughter Meredith, a recent recipient of a medical degree from University of Michigan Medical School, was a seasonal staff team member in 2016 and has worked at multiple SeriousFun camps, including The Painted Turtle in California and Flying Horse Farms in Ohio. 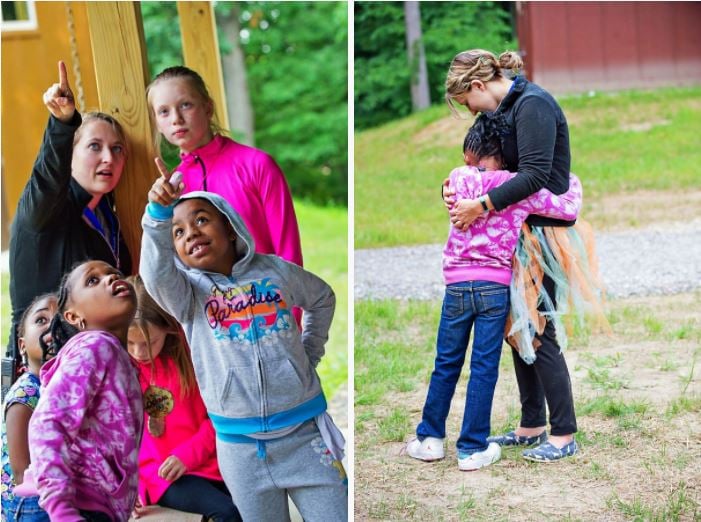 “It was an incredibly meaningful moment for me. It’s really hard to describe,” Dr. Skip shares of what it meant to save a life alongside his daughter. “Meredith was the one who said, ‘Dad, we really need to check this out.’ Someone had started to do a little bit of first aid, but when we got there it was evident David needed CPR right away. I was proud of the way Meredith responded—she did a great job and she was very composed. We’re both really glad that David is now doing well.” 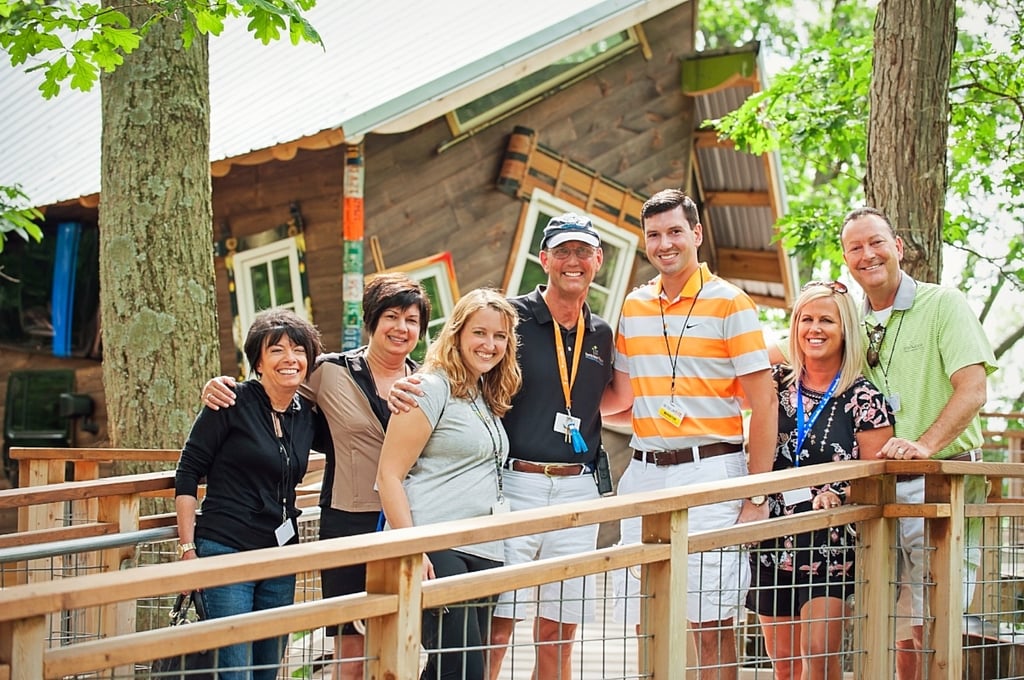 David reunites with Meredith and Dr. Skip during Cardiology Camp.

And David is, indeed, doing well! He visited North Star Reach during its cardiology week, where he was able to meet kids going through their own health struggles.

Meanwhile, David's friends had organized a fundraising campaign to help cover some of his medical costs. They've decided to donate the surplus to North Star Reach to give back to those same kids who've experienced serious illnesses so early on in life.

Aside from being in the right place at the right time because of camp, Dr. Skip also credits much of his career and personal growth to his experiences there. Here’s what he shared with us. 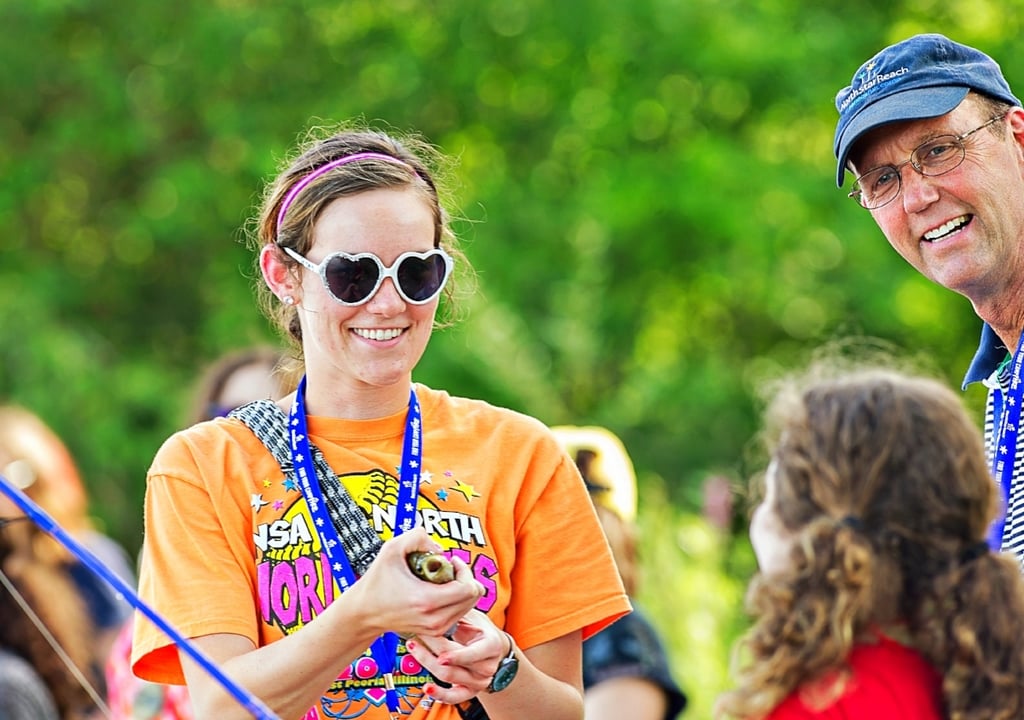 Dr. Skip looks on as a camper prepares to kiss a fish!

In addition to serving as Medical Director at North Star Reach, Dr. Skip Walton practices Adult and Pediatric Emergency Medicine at St. John Hospital & Medical Center in Detroit, MI. Prior to this position, he taught at the University of Michigan where he spent time trying to find his footing as a medical professional.

“In the early 2000s, the Chair of the Department of Emergency Medicine encouraged me to develop an academic interest. When you’re at a teaching hospital, having an area of research apart from patient care is an important part of your career. But I wasn’t sure what I wanted to do.

“Around this time, I was driving my son Charlie and Meredith back from camp in New Hampshire. Charlie went to the same camp that I went to when I was a kid. And I had one of those light bulb moments: I realized I wanted to study healthcare at summer camps."

Really, Dr. Skip says, this was a moment of rediscovery. Reflecting on his own years as a camper, he shares "Originally, I went into medicine because of camp—because camp taught me that the way to have a meaningful life is to serve others." 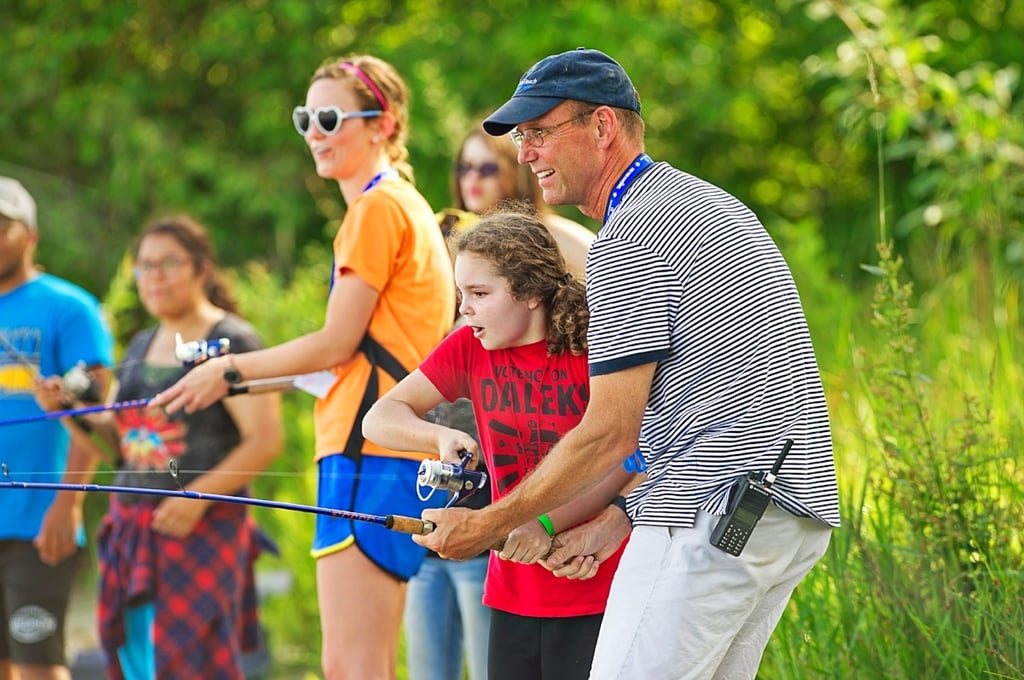 Dr. Skip helps a camper real in another catch.

“As a result of that light bulb moment, I got involved with the American Camp Association and the American Academy of Pediatrics and that's when I first heard about SeriousFun. Fortunately Doug Armstrong, the CEO of North Star Reach, started talking to me about getting involved with camp here in Michigan. I began working with Wendy Cook, SeriousFun’s Medical Director, and that got us to where we are now—opening North Star Reach last year and becoming the ninth SeriousFun camp in the U.S.”

What Gives His Work Meaning

At camp, Dr. Skip and his team of medical staff bring magic to life by ensuring that kids are well cared for so their one and only focus can be having fun. No matter their conditions or abilities, they can participate in activities like fishing and swimming, two of Dr. Skip’s personal favorites. The camp is designed to meet the needs of all campers thanks to its temperature-regulated and wheelchair-accessible pools and cabins. North Star Reach's summer programs serve children and their siblings from Michigan and the greater Chicago area who are living with serious medical challenges, including hematology conditions, organ transplants, and cardiac conditions. 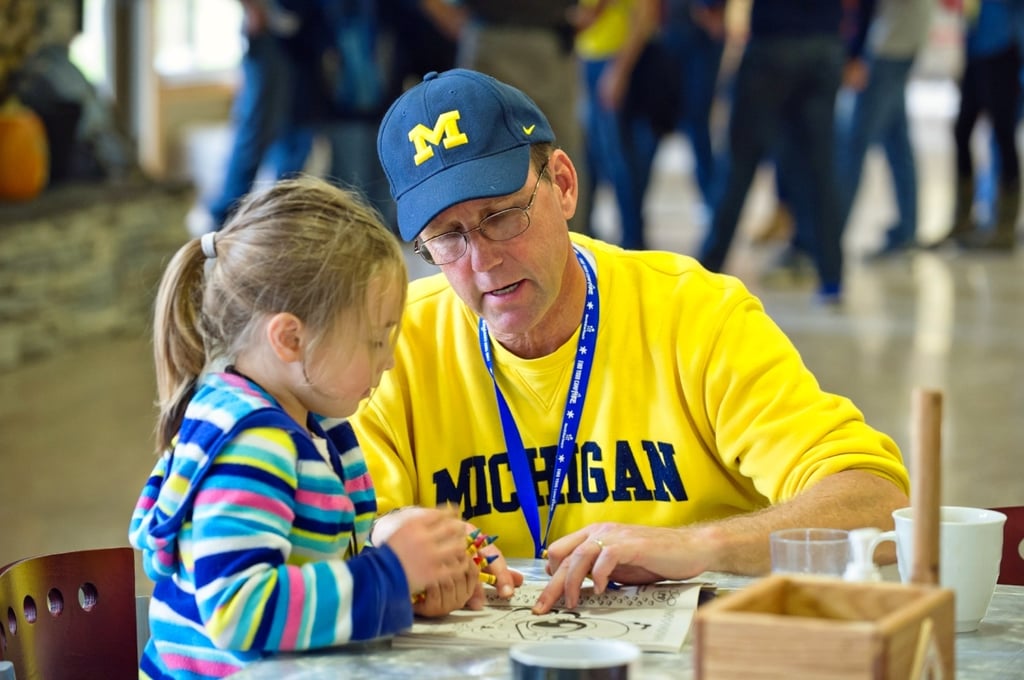 Dr. Skip spends time coloring with a camper during a Family Camp Weekend.

“I think the amazing thing about camp is the kindness that kids show one another. I think it's really changed the way I practice medicine—it’s given me more patience. Being in emergency medicine is stressful and there are a lot of who people who go through burn out at some point in their career. Being involved with camp has re-energized me. I’ve been practicing emergency medicine for almost thirty years. And when you have a long career like mine, you have to find the thing in your life that really gives you meaning—for me, that’s been camp.

“I’ve also really enjoyed getting other doctors involved and helping them catch the camp bug. Now they’re taking their camp experiences back to their facilities and telling their patients and their colleagues about it, and that makes our voice louder. I really want them to feel part of the camp community, just like I feel during my dedicated week of camp, which is Transplant Camp. My hope is that our medical volunteers keep coming back year after year.” 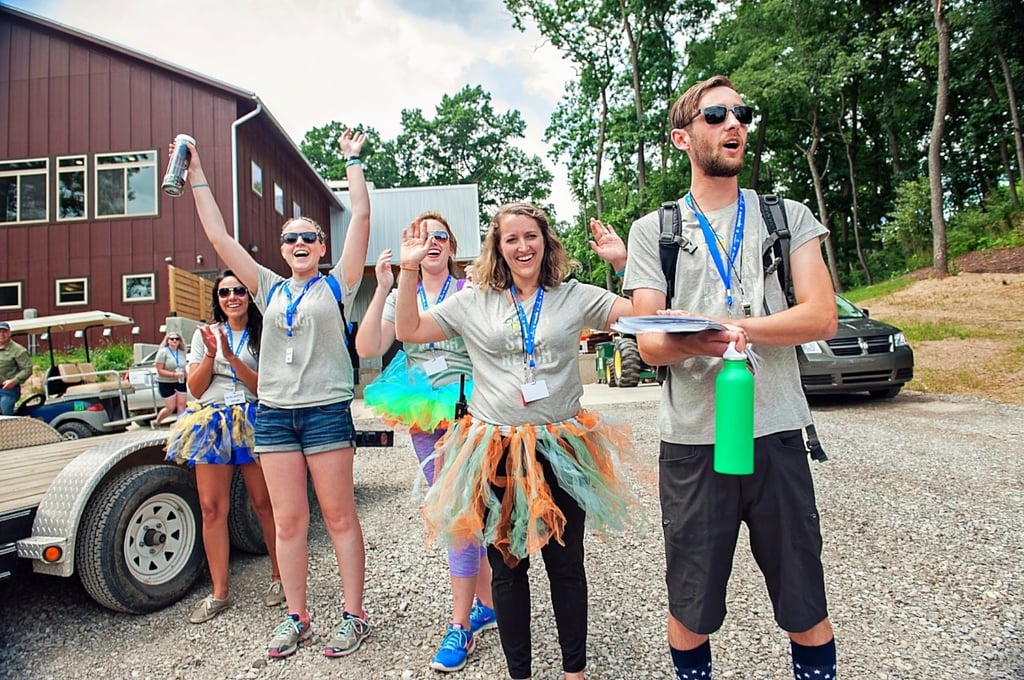 Meredith cheers as campers arrive with fellow staff and volunteers

Heroes of All Ages

Working at camp isn't the only way Dr. Skip is helping change lives. Dr. Skip was deployed as a trauma team leader in Afghanistan from 2013 to 2014. He is also a Navy Reservist and has been recognized with the Navy and Marine Corps Commendation Medal and Navy Achievement Medal for outstanding service. He’s about to embark on an extended nine-month deployment abroad this fall. And though it may seem at odds, his experience in the military has shaped him as a medical professional.

“Just as I find that camp people are special, Navy people are special, too. They’re similar in their commitment and the way they care deeply about what they do. It’s a privilege to take care of heroes—the troops that are willing to go out there every day and put their lives on the line for all of us. I also get to work with heroes when I’m with kids at camp because there’s so much that they have go through—the kids and their families are some of the bravest people I know. They have to survive stuff that most of us could never even comprehend. So, I see bravery in both places." 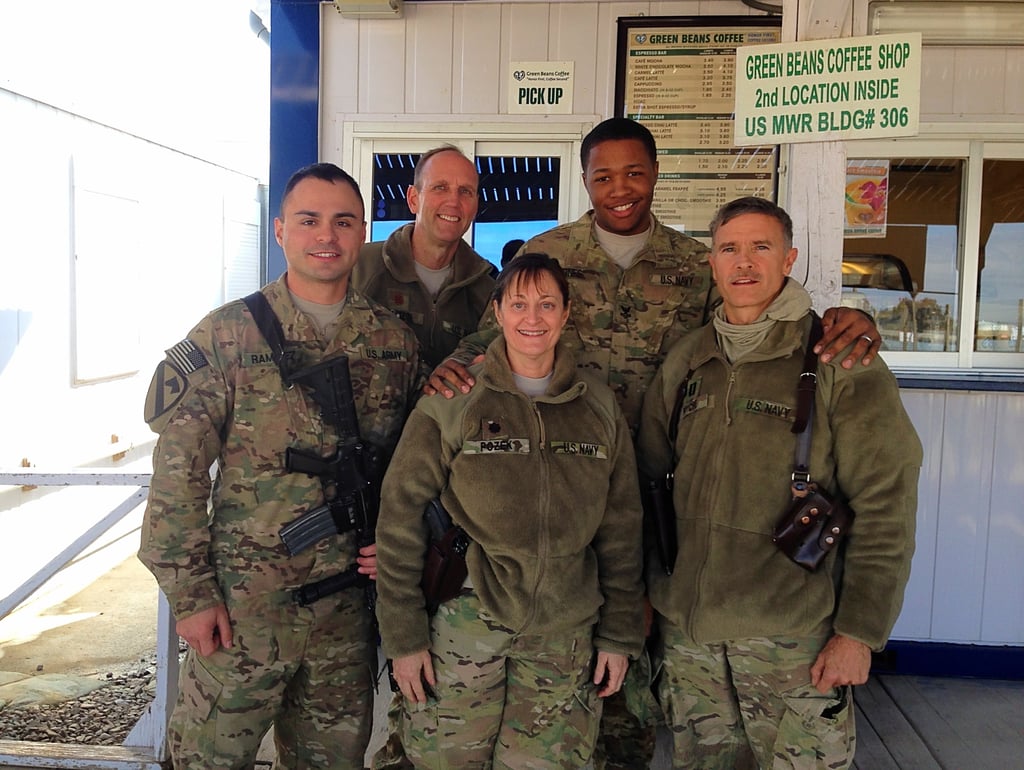 Being Silly Matters as Much as Being Brave

Dr. Skip may be very serious about medicine, but he’s not afraid to show his silly side. At camp, Dr. Skip takes the lead from kids and staff to “get even sillier during opening campfire.”

“The Health Center always does a skit, and I’ve been the Wizard of Oz, Chewbacca, Forest Gump, and, most recently, I was Mrs. Doubtfire. I’m inspired by our program staff, who remind us that we have to commit to our silly characters.

“If the Medical Director can show a level of commitment by being silly and, you know, dancing on stage in front of everybody else, then maybe the kids who are a little bit more reticent will do the same thing.  Those are my silliest moments, but I think those are important moments, too.”

“Especially for a medical professional, camp can really help you remember why you went into this business. These days, when you spend a lot of your time in front of electronic medical records, disconnected from your patients, this is where you can really reconnect.”

Sara loves being in the sun and trying new things—a major plus when they happen together (like at camp!). When she’s not learning about the nifty ins and outs of SeriousFun, you’ll find her tasting new foods or practicing mindfulness and yoga. Fun fact: her favorite animal is a shark.

Get Involved with SeriousFun Camps and Programs