On November 1, Jimmy Fallon launched the very first flavor of Ben & Jerry’s new Secret Stash line – Marshmallow Moon! The ice cream – made up of vanilla ice cream with marshmallow, graham cracker swirls, and fudge chunks – is available only for an extremely limited time on Ben & Jerry’s e-commerce store and in participating Scoop Shops. 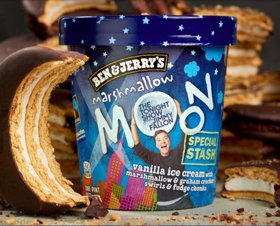 Proceeds from Tonight Dough have raised more than $1.2 million dollars for SeriousFun, supporting programs that have a lasting impact on the lives of children with serious illnesses and their family members around the world, totally free of charge.

"I'm so excited about Marshmallow Moon," Fallon said. "And the name totally makes sense, because the Tonight Show logo has a moon, and I have a body like a marshmallow.”

While Fallon poked fun at himself, SeriousFun Children’s Network CEO Blake Maher reiterated the importance of the relationship in a Fallon-friendly format, a thank you note: “Thank you Ben & Jerry’s and Jimmy Fallon for helping us serve up two big scoops of camp magic to kids living with serious illnesses all around the world. Your support in raising both funds and awareness is essential to providing truly transformative camp experiences to children who need them most.”

We are sending a HUGE camp-sized thank you to our friends Jimmy Fallon and Ben & Jerry’s for continuing to raise awareness of the life-changing experiences offered by SeriousFun camps and programs everywhere. There is nothing we take more seriously than giving kids back their childhood, and nothing is more fun than ice cream!

Jimmy, Ben and Jerry
-We love you to the
Marshmallow Moon and back!

Find a SeriousFun camp near you